I was coherced! I was bullied! I was called by my running partner and asked if I wanted to runDisney again and I had NO hesitation saying yes! It’s DISNEY.

I thought I didn’t train enough last time… this time I didn’t train AT ALL. It was a terrible decision really. I had full intentions to train, I printed out the training calendar and then I’d get in the car to do a long work drive and have zero energy to get on the treadmill at the hotels.

As the months grew closer and all of a sudden I had 3 weeks till I was driving and running for fun, I decided to gauge myself on where I might end up for the TWO races I’d signed up for. Come on, you’re driving 10 hours to run one race? I think not…. We’re running two races, a 10K and the Half-Marathon (like before) and getting ourselves 3 more Disney medals. crap.

So my gauge run wasn’t great, I think I ended up only running a max of 4 miles at once for the lead up to 19.3 over two days… I’ve done it before, I’ll be fine right?

yikes. So I met Mom first in Orlando while she was in town for her annual work conference. They also happen to rent out part of Universal Studios to have some fun with, so we got a late backdoor entry with all food & beverages covered and had some fun 🙂 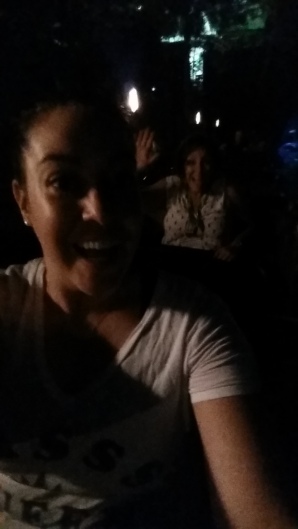 We had some serious giggles at the Raptor Encounter 🙂

After mom had to leave, I made my way to the airport to pick up my running partner and on to Disney’s All-Star Sports Resort we went! We decided during the Disney Princess race weekend that we’d definitely choose this property for our next race weekend as it is the first stop for the busses. We still had to be up at 2:30am but at least this time we got smart and went to bed by 7:30pm for a good night’s rest and it made all the difference in the world. Training or not, it’s easier to run a 10k (6.2 miles) on a full night’s rest rather than a nap.

I decided on costumes fairly late this time too. So unprepared. But it all turned out decently! I have always been a music lover, so not being able to decide on a specific character (that wouldn’t be too copied) I went with A Goofy Movie. 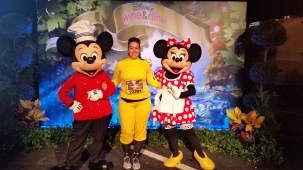 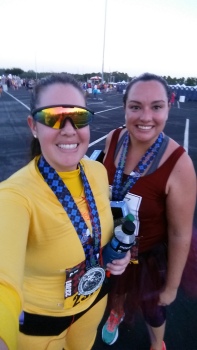 We have decided we like the 10k best because you at least get half the race through Epcot and the boardwalk. Much more to look at/ distract you from the pain happening in your hips.

Yes its still fairly dark because it’s 5:30am before the first gun goes off, running through the parks before any other tourists get there is kind of fun. I’ve always had the vision of having free range to an amusement park without the crowds of slow meandering people in the way but at least with the races, everyone is moving in the same direction!

We congratulated ourselves for finishing (1:25:26 for me) by staying on our feet and heading to Hollywood Studios for the day, or MGM as I stil l know it.

Sadly, it’s just not the same anymore. They’re undergoing a TON of renovations which include the Star Wars area, but they’ve gotten rid of the Backlot tour (booooo) and it’s turning into a muppet area. Rock ‘n Rollercoaster with Aerosmith was also closed for renovations and there was NO way we were going on Tower of Terror. Thanks anyway.

We got fastpasses for shows instead, Beauty & the Beast and Indiana Jones. While I love the shows, I used to never understand why mom always suggested we go and just sit when there were rides to get on!! I get it now. I’m sorry I ever argued in the past. Sitting is good. It’s the whole getting up after thing that was rough. 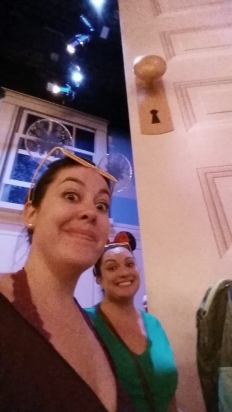 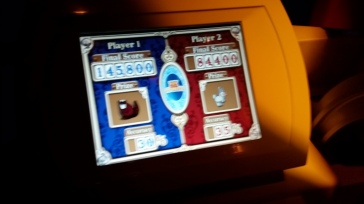 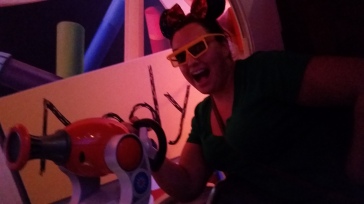 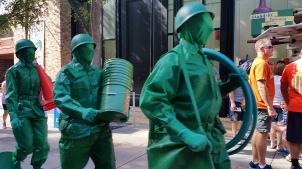 Oh, worth mentioning, Pizza Planet is gone too…. but we did wait in line for the Woody’s Roundup. Have I told you I’m competitive? whoops. I also picked up some new light up ears since I stupidly left my silver sparkle ones at home.

Back to the hotel for an early night and to pick up “runner boxes” that contain a stale bagel, peanut butter, water, banana & granola bar for breakfast and into bed by 7:30 again in prep for our 13.1 mile race the next morning.

I felt great the first couple miles. I’ll be honest, this race is rough anyway. My favorite half marathon to date was the Nike Women’s Half-Marathon through DC because you had all the monuments to look at every mile. Most of this Disney Race is on the road/highway.

This race did lead us through Animal Kingdom however, a park I’d never been to! So as we approached, I let my partners know I was going to take it slow through this stretch so I could see it.

Can you guess who I decided to run as for this race? Probably not, it was more of an interpretation of the costume conducive to running (which she does for half the movie anyway), but I channeled my inner Rey.

Walking was probably the death of me that early in our race because it pretty much allowed my brain to tell my body “this is fine, we can just keep walking and still finish no problem” which is what I did…. with a 3:14:04 finish. Oh well, this race is for fun anway. My gps also kept telling me I had finished about half a mile before the finish line… I’m attributing this to bobbing and weaving through people on the course. You and 15,000 of your closest friends. Talk about a traffic jam.

My running partner smartly made a massage reservation the afternoon after our race at the Grand Floridian! Pinky up faaaaaancy. I decided last minute to jump in for a pedicure to help my aching feet and luckily they had a service around the same time as her massage! Jenga!

We leisurely made our way to to the pool at All-Star Sports to stretch since we arrived back after our race around 9am, found lunch at the cafeteria and then hopped aboard the Magic Kingdom bus to catch the monorail over to the Grand. When I say leisurely… I mean we hobbled our aching muscles and willed them to carry us further with the promise of a jacuzzi tub at the end.

By booking just a pedicure, I was still given access to the entire spa amenities. Yes that means a fabulously soft & fluffy robe, the jacuzzi, steam/sauna, showers, relaxation station, tea, coffee, snack tidbits… the whole 9. And boy did I take advantage.

We started in the hot tub until our hips weren’t screaming at us everytime we moved and it was making us sweat. I then gleefully jumped in the shower, blow dried my hair, and grabbed a carafe of dried fruit and a cup of tea to await my technicians call.

I’ll tell you what else is awesome about this place, when you go for a nail service you go pick your color… same as any other place. BUT what you’re not expecting is for them to say “the small bottle of color you choose is complimentary for you to take with you”. WHY DOESN’T EVERY SALON DO THIS?! Sure it’s a sample size bottle, but they toss it in a cute little mesh bag with your nail files and off you go! Not to mention a yummy piece of chocolate to enjoy during your service.

Between the massaging chair and the magical fingers rubbing my aching feet, I about fell asleep. Sadly it had to come to an end, but that just meant I had to make myself comfy again in the lounge and await the partner’s end of service.

By running these races we were given late entry to Epcot for the post-race party during the Wine & Dine Festival! We got to enter around 8pm, and we beelined for testrack. 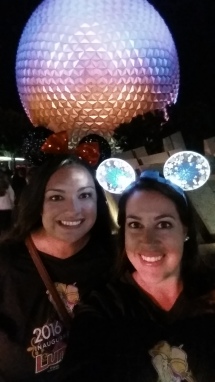 So after the 9pm Illuminations fireworks here at Epcot they ushered most of the normal guests out of the park, shut down some of the food to restock and opened back up at 10pm for the runners. We grabbed a beer to hold us over as we wandered towards France for dinner. Add on red wine, champagne, another beer with fish & chips in Irleand and then a flight at the craft beer place we were ready for bed.

We also had decided to sleep in a bit for Monday morning before heading to the Magic Kingdom for the day. 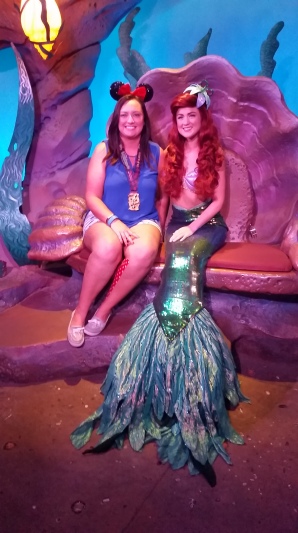 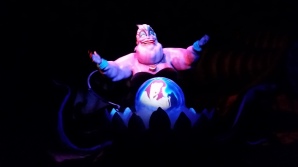 We planned this Monday much better than last year. Our first fastpasses were at 10:30am to Buzz Lightyear’s ride (I already mentioned I’m competitive right? see: score photos & guess  which one I am). We grabbed pretzels & waters and jumped into the ever growing fastpass line. Then around the back we went, hitting Dumbo, The Little Mermaid, and Gaston “its the best day of your life, I know”.

After a pee break, running mate mentioned “the next time I come here I’m eating at Be Our Guest restaurant” so I opened our My Disney Experience app just in case there might be a slot available.

“SO…. How do you feel about eating there at 12:45 today?” and our lunch was booked 🙂 We got super lucky to snag that one. 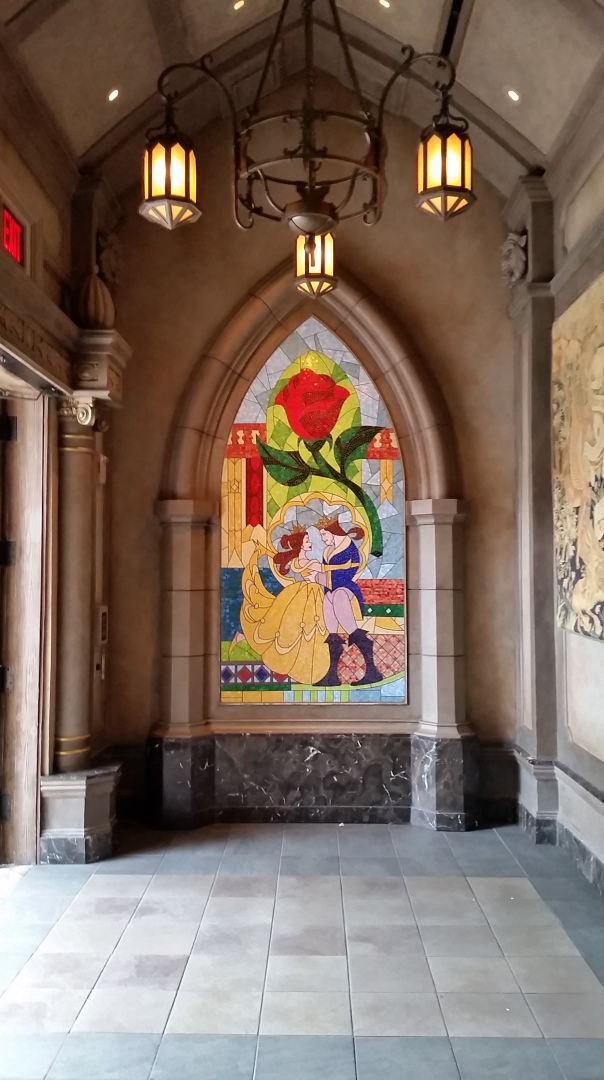 So when at the Be Our Guest restaurant, it’s a pretty cool setup. You scan your Disney wristband, put in your order and then go find a place to sit. Magically your food appears at your table via waiters pushing little carts! Thanks to technology & gps in the wristbands they make that Disney Magic happen.

Partner of course ordered the cupcake with the “grey stuff” and it was delicious!

We continued our day on the carousel and made our way towards Splash Mountain, Pirates of the Caribbean, the Jingle Cruise (Christmas version of the Jungle Cruise) and the Haunted Mansion.

We were a little bummed that there wouldn’t be fireworks that night since Mickey’s Very Merry Christmas Party was kicking off but that was an extra ticket. We however, were NOT leaving until we saw the castle light up. Gosh Darnit! 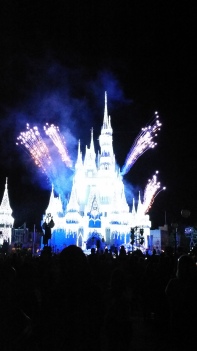 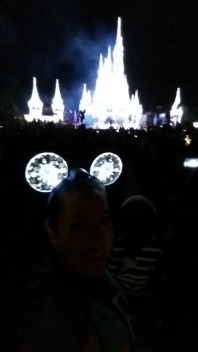 It was Anna & Elsa’s Frozen Holiday Wish so of course Elsa lights up the castle with an impressive projected light show and then the twinkle lights come on. Ahhh Disney.

I drove back to New Orleans Tuesday while my partner took herself to Harry Potter World. I needed to get back and get a good night’s sleep before jumping on a plane to LONDON for my next half of vacation.

So if you’re still asking “how the hell did you rack up THAT many steps in 5 days?!” I’ll give you a hint…. Half-Marathon day partnered with Epcot got us over 40k of them. 😉