To be honest – fitness is more than the number on the scale or how much heavy junk you can pick up or put down.

It’s about you. Not the models on the magazine covers, or the actresses in hollywood. Those people shell out thousands of dollars for dieticians, nutritionists, trainers, etc. They’ve got somebody doing it for them. I’m talking about us normal folk.

I played sports my whole life. I knew all about conditioning for my specific sport and did all the normal stuff – push ups, crunches, sprints… you know, gym class physical fitness testing. I learned real weight lifting to build muscle my first year in college on the softball team and man, did it kick my ass. It took till my second year to really see a difference – the year we went to the D3 Women’s College World Series for the first time in school history. 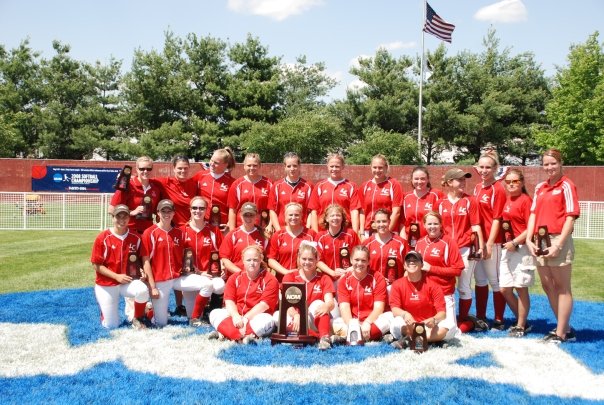 That was the best shape I’ve ever been in, in my entire life. I was right around a size 8-10. I think I skipped all the smaller numbers, I feel like in middle school I was wearing a 3-5 and then all of a sudden jumped to an 8-10 where I remained for most of High School and college.

Here’s the thing about women’s clothing sizes… NONE OF IT MAKES SENSE. Depending on the fabric, cut, style, etc. you could be a Small in one thing, and an XL in another – don’t even get me started on Amazon sizing from China….. And honestly… who else is going to see that tag besides you?!

Anyway – back to being an athlete. I always had to work hard – there was little natural talent (unlike my brother who is a string bean and succeeds in everything) so I had to learn proper techniques, practice harder, and keep running. My legs have always been sturdy, minus that time I slid into a catcher and broke my leg and it was then smaller than the other, but anyway…. Sturdy, thick, strong, pick your descriptor. I’ve always had wider hips (genetics) a big butt (sorry mom… genetics) and tree trunk-esk lower legs. That’s just what I needed to be successful as a pitcher. Typical Softball player’s build.

I was never too concerned about it because that’s just the way my body had to be – to do what I asked it to do. Pitch for 5 hours a day – 6 days a week, field drills, endurance runs in-between, and lift weights 3 days a week.

In 2009 I was holding steady… Same shape, same needs, consistent weight. Even through a summer internship on my own in NYC and a trip to Vermont to the Trapp Family Lodge (yes Von Trapp as in Sound of Music).

Now, I ran into some depression in 2010 and lost a lot of that weight and it was awful.. I almost looked sickly. I was tired all the time, couldn’t eat, and just basically moped around from February – July. I was still a size 8.

By 2011 I was beginning to gain the weight back and jumped into a size 10 dress for my sister’s wedding.

Since my workout regimen stopped right after graduation, I continued with the same tired workouts I knew from college – but it didn’t do much for me because I had no good reason for doing it besides “staying in some kind of shape” so I did what all my other teammates did…. I signed up for races.

Soooo bored… I was consistent in my sizing so I didn’t know what else to do. All my clothes still fit so woo hoo for saving that money to pay for the races. But I needed something else to keep me entertained. There’s only so much you can think about when you’re running by yourself for long distances, and the only times I effectively trained were for the Diva half, Nike half (where I had my PR), and my first Disney weekend… I didn’t train at all for the second.

That’s where we come up to speed for current lifestyle. I never was able to figure out a good workout schedule living in New Orleans – being on the road all the time across 3 states made it tough to get consistent attendance at the local gym that was overpriced, so I would go and do the same college exercises I’d been doing for 9 years, very lazily and maybe a bodypump class every blue moon (followed by tacos). I fluctuated between a 10-14. For serious though – the food there is so worth it.

Until I moved to Charlotte.

I’ve been here 3 months now, and my quality of life has increased ten-fold. Bigger living space, better neighborhood, better driving distances for work, I found a church to attend regularly and thanks to an old Redskins colleague and friend, I’ve been introduced to Camp Gladiator.

CG (wut wut!) sounds intense. I watched the videos on the website a couple times and was still nervous my first day – I didn’t quite know what to expect, but I lucked into a happy camper code which would give me 1 month of the boot camp style workout for free. I figured, what the heck – I need to get out and see if I can make some new friends, if I hate it, I never have to go back.

After the second workout, I was hooked. I went BOLD. Meaning after the original free camp month was up, I was going to continue going and pay. I love my trainer Stephanie, she’s upbeat, supportive and has her own story that’s only a 6 year journey. The groups aren’t too big – maybe 12 or less campers (for my location right across the street from my apartment) 3-4 mornings a week. And you can attend any camps anywhere. I’ve been to two Saturday camps with Cara while here and there are a lot more people. 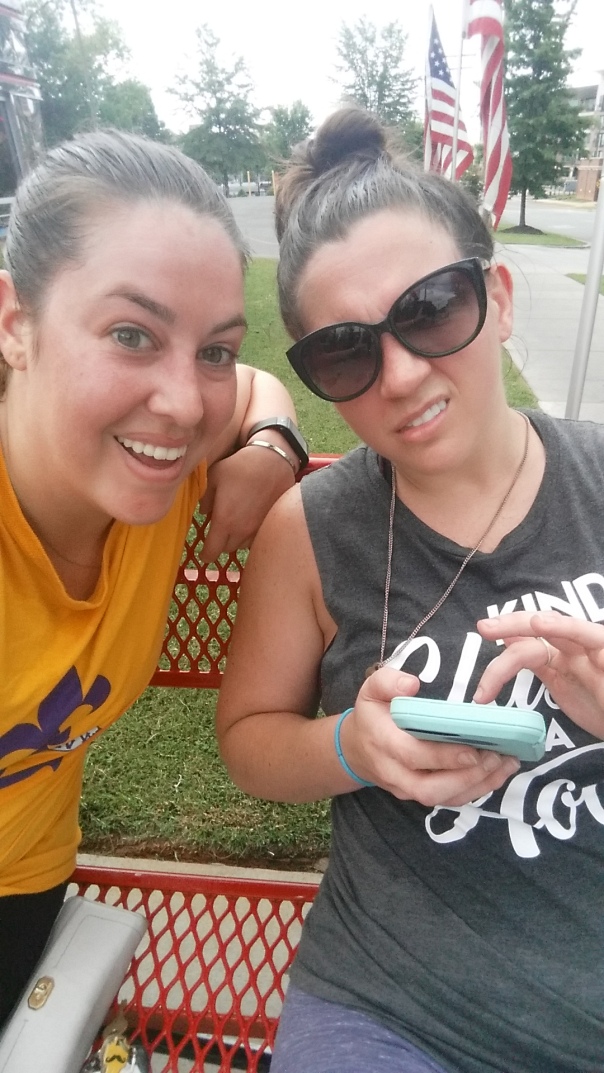 I have more energy (hello I’m awake by 6:15 M/W/F), and I’ve noticed a stronger amount of success in my workday. I also adjusted my diet to include more protein through recovery shakes, and I’m trying to eat a real breakfast, lunch & dinner with healthy snacks in-between (although I did have a burger and pizza this week). Also…. drinking a TON of water. Seriously, I have to pee all the time.

I will say that I don’t own a scale in my house – it’s never been about the numbers. It’s more about a look and a feel for me. I want to look healthy, and strong. I know I was weighing around 178-180 at the start of all this on my 5’4″ frame. I checked today in the apartment’s gym and was a little dismayed to see the 184 number blinking back at me however I know that muscle weighs more so that’s to be expected in the first month.

What I really went by was the inch number (now, I seem to have misplaced my body tape measurer so I’ve been using a headphone cord and putting it against a normal tool tape measurer…. substituting right?)

Here I am back in Mid-June: 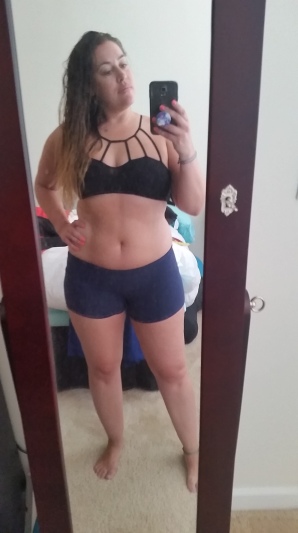 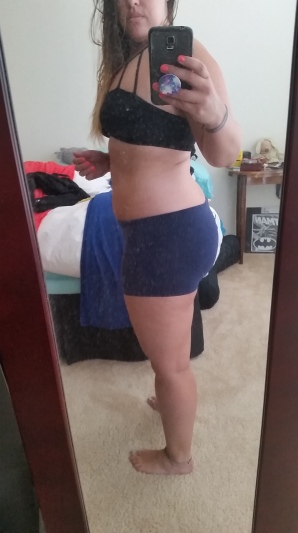 And this is 1 month later: 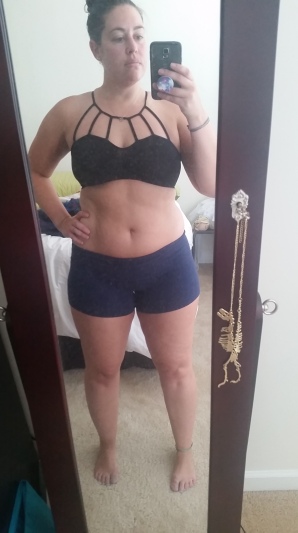 So while I can’t quite notice a difference physically yet. I FEEL the difference. I’m stronger, I have more endurance, and the inches lost make me feel better at not seeing the change in the mirror.

My dad always told me it takes 30 days to create a habit. 1 month. You can do anything for one month so I’m excited to see where the rest of this journey will take me, gaining more confidence as I get stronger, and supporting the other campers I see every week.

I understand the wanting to quit because you’re not seeing a difference. The “well what does it matter anyway if I’m just always going to look like this?”. Keep at it for yourself – not for anyone else.

And yes I can get points for referrals so if you want to try Camp Gladiator (available in select locations), leave your email and I’ll send you my code 🙂