Than a silly boy with a horse and a stick… Tournament of Roses time!

I thought 2016 was a bucket list kicker, but the very FIRST day of 2017 I was jumping a flight to California for the first time in 15 years. Wow that makes me feel old.

So, 15 years ago I was in 8th grade (aaaand that makes me even older) running a 5 mile challenge in middle school for the pride of a T-shirt with my last name on the back, my name on the wall of the gymnasium and personal hurrah’s for running 5-miles nonstop. I BEGGED my parents to let me go to school that morning before we hopped a flight to California for my uncle’s wedding. Halfway through the race a classmate collapsed and had to be helicoptered out, the run was suspended so the helicopter could land and there went my dreams of glory. We were off to the Golden Coast. Don’t worry, I was one of 5 kids who re-ran the entire race on another morning when everyone else got to stop and restart after the helicopter took off…. we totally should have been the only ones on the wall that year. Dad was there to take pictures & cheer me on – the shirt still fits.

My family has traditions… For instance, Thanksgiving morning we all get up in time to watch the entire Macy’s Thanksgiving Day Parade, anxiously awaiting Santa’s official arrival and the appropriate time to start Christmas music. Christmas, the kids (and dog) still sit at the top of the stairs awaiting the “all clear” to come down and see if Santa delivered the night before…. (we’re all over the age of 21… dad still videotapes our reactions walking into the living room) etc.

January 1 is Rose Bowl day (unless it falls on a Sunday). Mom gets up, coffee is made, and we all settle into our seats to be amazed at floating art created entirely of flowers, seeds & more for an 11am start time. It’s always been on our bucket list to actually attend in person and after years of waiting…. we finally got our chance.

Through an incredible twist of fate and maybe a miracle or two, Penn State became bowl eligible and secured a spot in the famed Rose Bowl game. Not only did the stars align for that, but also for Brother… who is headed into his Senior spring semester in Happy Valley. There was no time like the present to throw caution to the wind and immediately purchase game tickets, grandstand rose parade tickets, and plane ticket with almost no second thought of price. This was OUR time.

I had managed to snag a round trip direct flight home for Christmas all on points so the thought never crossed my mind that I wasn’t going to California too. Mom immediately got online and purchased grandstand seats for the parade (near parking garage, and across from a 7-11, starbucks & chick-fil-a… not bad for first timers!). I attempted to switch my flights so I could travel with the family but it was going to cost more than the initial flight so I jumped back to NOLA for New Years Eve… which was spent on the couch since the weather was nasty, and not a drop of champagne was poured. But hey, I’ve got an entire bottle of champagne chillin’ in the fridge 🙂 My cousin whom I hadn’t seen since my sister’s wedding has recently moved back from Germany to the Long Beach, CA area so we begged her to let us crash with her and the hubby. She rented a mini van to transport everyone 🙂

I arrived on New Years Day around lunchtime and we all cozied in to watch the Giants v. Redskins game with pizza, resting up for a 5:45am AIS (Ass In Seat) plan for the next morning. And I begged and pleaded until my family appeased me by taking me to In-N-Out Burger.

Everything just seemed to work out easliy for us on game day. We got to the parking garage with NO problem and very little traffic, parked, waited in line for hot coffee at 7-11 and carried pre-purchased donettes & krispy kremes to our seats with more than enough time to wait for the parade.

And yes, it was the ROSE parade, I made flower crowns for us girls 🙂 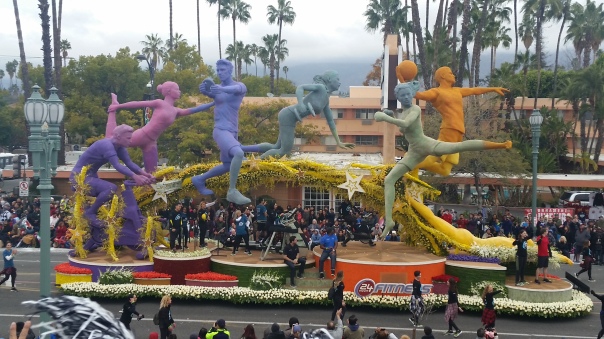 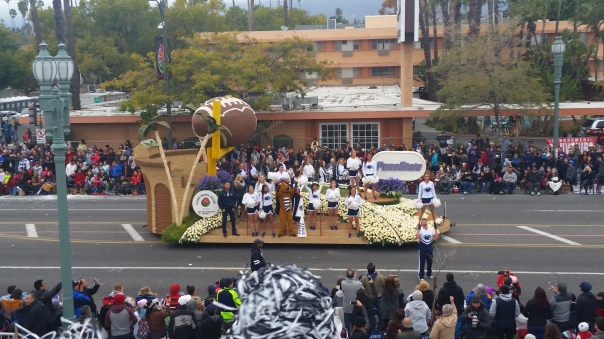 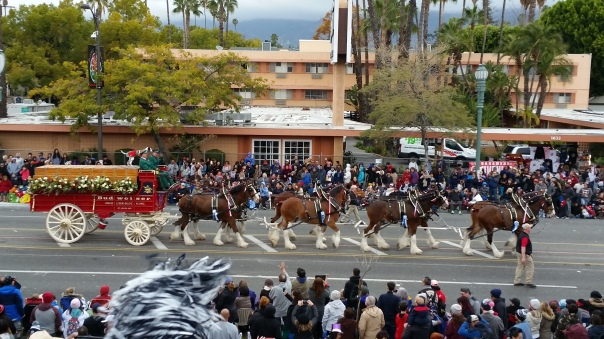 It was a little chilly in Southern California so we were more bundled than expected but ready for post-parade “juice” to warm us up at a short tailgate before heading into the famous Rose Bowl stadium. 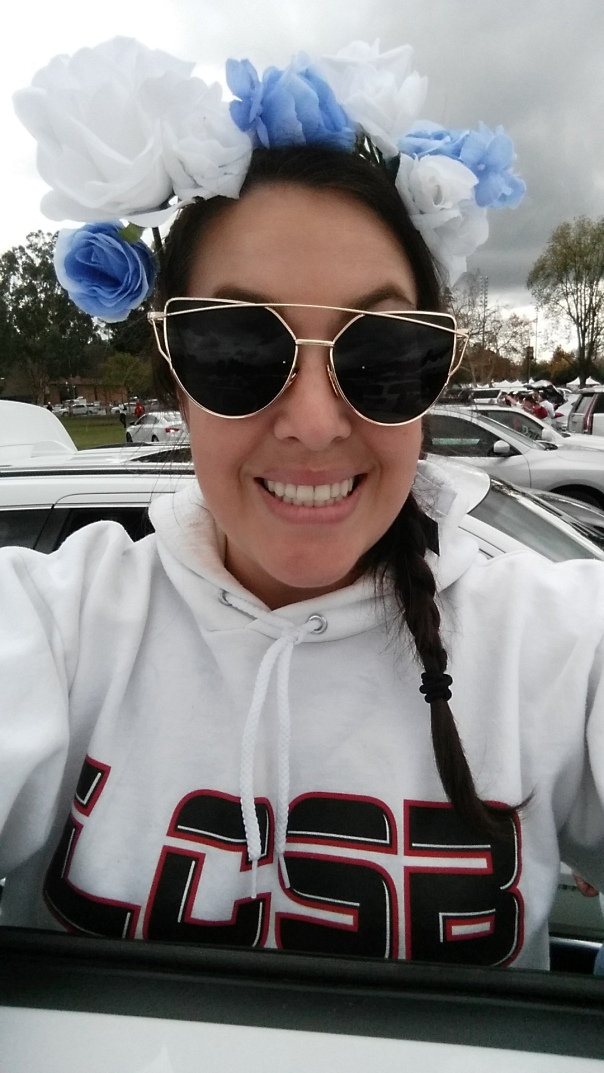 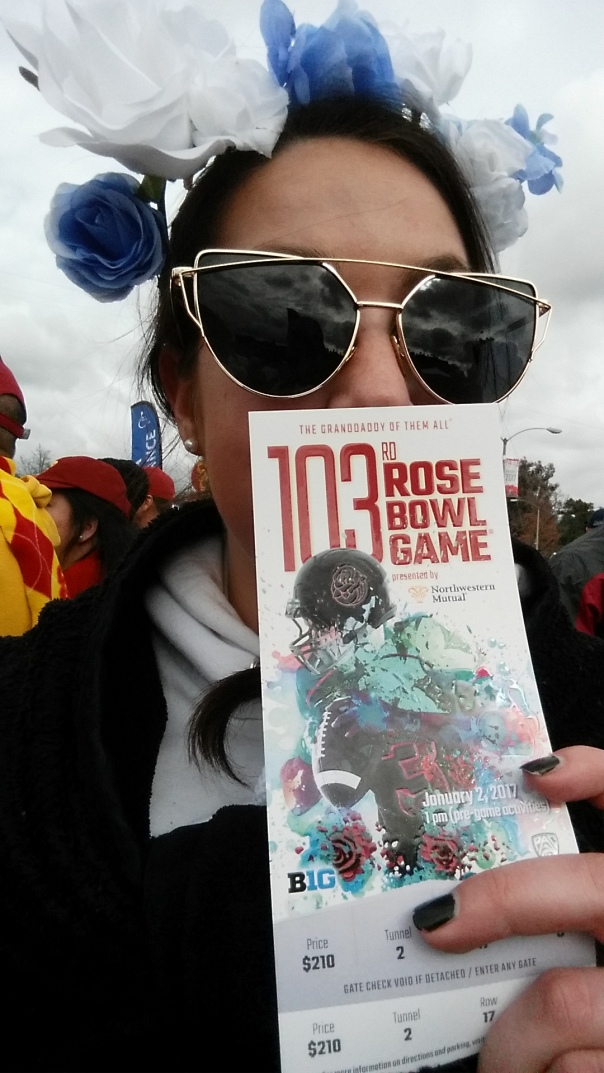 When tickets arrived after Christmas we realized we had been upgraded.

It was an anxiety-ridden game until the very final seconds. A bunch of the big plays unfolded right in front of us and my voice went hoarse from all the yelling. Sadly, Penn State’s Nittany Lions did not emerge victorious but it was quite the experience. I never thought I’d have a chance to see but oh how life works sometimes. 🙂

Since we were up at the ass-crack of dawn, Pacific time…. after the game we ducked into Shake Shack for more burgers and were all in bed by 9:30pm.

The final day for me was spent wandering Santa Monica and seeing the pier! 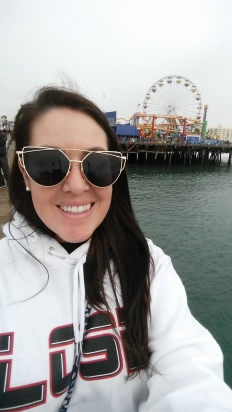 My flight had been delayed on the way to the airport so I dug back into my first book of the year and happily finished it before landing in New Orleans. 10/10 would recommend to everyone.

I really need to work on these quick trips… maybe more than 48 hours in a place to really get the full experience 🙂 Guess that’s next on my bucket list!