When your little brother asks you to come home for the big country music festival you took him to last year. You can’t say no.

It was also an awesome opportunity to see the whole family, and hug some old friends. I booked an early flight so I could work from home the rest of the day but my awesome boss told me to just take the day. So brother and I took ourselves to Big Seester’s school (it was field day) and hung out with her and her gaggle of first graders. Fun story, I had bought a new dress from Old Navy the day before (it was on sale for $27) and decided to wear it home because it was easy.

Apparently I now look old enought to be the mother of a first grader…. One of the guidance counselors happened to ask Big Seester “who is the parent in the yellow dress… and WHY is she so dressed up for Field Day…?” the answer – “oh, no. That’s my sister, she just got off a plane”.

It was nice finally getting to spend time with Little Brother, he’s been doing so well at Penn State but quality time was definitely needed. We had to wait and wait and wait to figure out a plan with the boys (my best friends from home) as they are terrible planners….

Here’s the thing about our family, we like the feeling of security when there is an idea of a plan that could be followed. Where are we meeting? What time? ok, thats it. done! It’s not rocket science! The boys on the other hand…. just go by “whatever, we’ll meet up when we meet up, and get there when we get there”. It sometimes makes me crazy.

Anywho…. rant over, we narrowed it down about 10pm Friday night that we’d meet at 2pm the next day and follow each other into the parking lot for tailgating. In typical me fashion, I arrived to the meetup spot about 30 minutes early, the boys? 20 minutes late. ahhhh home 🙂

After running a yellow light in front of some cops, and getting a thumbs up from my buddy in front of me for following close enough to do that, we were parked and unloading the snacks and cornhole boards. Yes, I continue my reign as Cornhole champion. 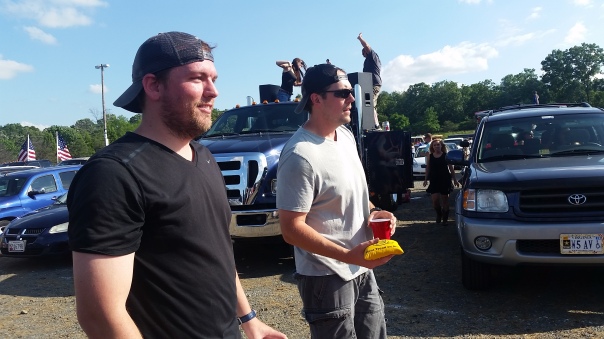 Brother had a few friends come down to join him, but its always fun to see him interacting with my friends too… He was always so little compared to their monstrous size. Its funny to see him keeping up with them now.

A little background about the boys. They are the best friends in the world. I’ve known them since middle/high school, and the fully bearded one in the photo above? His mom sold us our house 20 years ago. These guys are like brothers to me. We’ve always go each other’s backs. I hate being so far away, but I loved getting to spend time with them at one of our favorite events of the year.

Last year I brought Little Brother to WMZQfest for the first time. I’d been going with the boys or my sister since High School, so I was flabberghasted that he’d never been. Of COURSE he had to experience it with the boys…. and oh did he. So it didn’t suprise me that he wanted to go again this year. The lineup was Sam Hunt, Hunter Hayes, and Lady Antebellum.

Sam Hunt sounded awesome, but didn’t play for very long. Just the chart toppers… He doesn’t have too many of his own songs yet.

Hunter Hayes still looks like he’s 12… but he’s been around a few years. He’s also SUPER tiny… especially when standing next to the guys from Lady Antebellum.

Lady A was awesome. They sounded great and it was fun to hear songs I’d forgotten they sang. 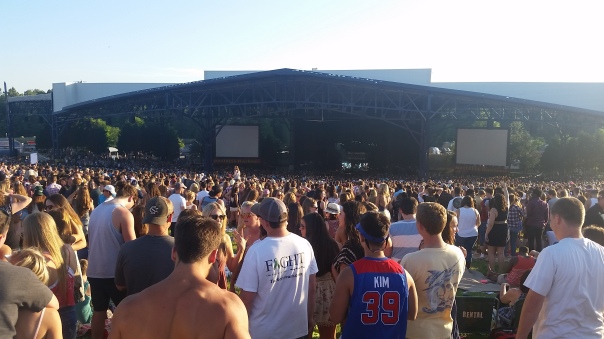 It’s always a very well attended event… but you better Redneckognize where you are. I will say I’m highly annoyed at the younger generations (ahem, high schoolers, I’m talking to you). Here’s the thing… It’s highly rude to be walking over top of someone else’s lawn blanket. I don’t know where this got lost in translation, but I seriously almost clothes-lined two entitled trollops in sundresses as they sprinted straight through ours in between a buddy and me. And THEN I turn around and some bro is just sprawled out, literally sharing my blanket space and elbowing me… Seriously Dude. what the hell. move your ass. I didn’t say anything to them, figured they’d leave eventually. And they did. 🙂 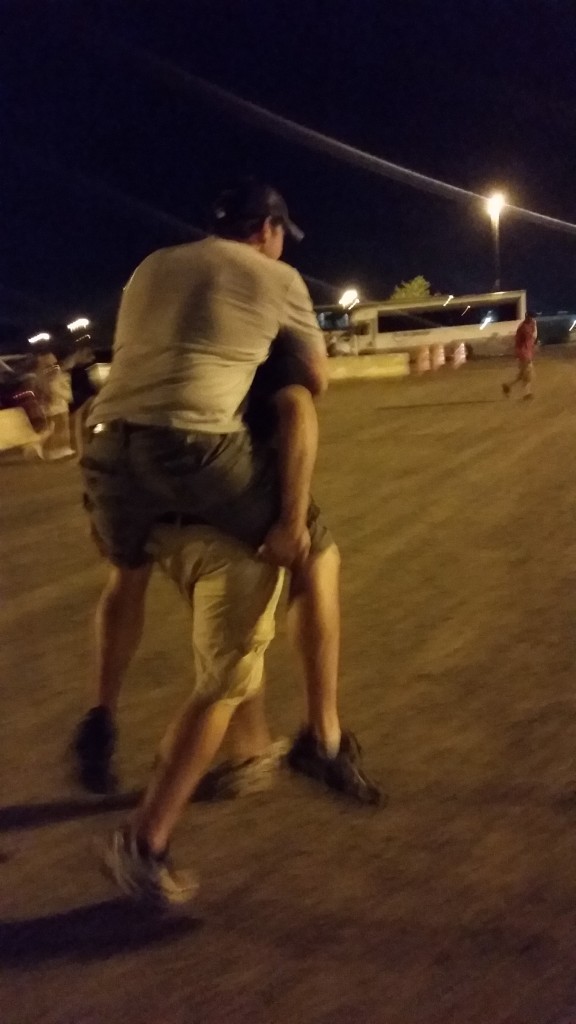 We left before the end of the concert, just to try to beat the traffic. Drinking in the sun all day and being a significant distance from clean restrooms will make that decision for you most days (good lord, when did I turn into my mother….). Brother’s friends passed out as soon as I started the car, thank goodness I made them drink Pedialyte before we left.

Sunday was Nugget day 🙂 Big Seester has been posting videos all over facebook of him attempting to walk (he’s a little over a year old) and I could NOT miss out on that. 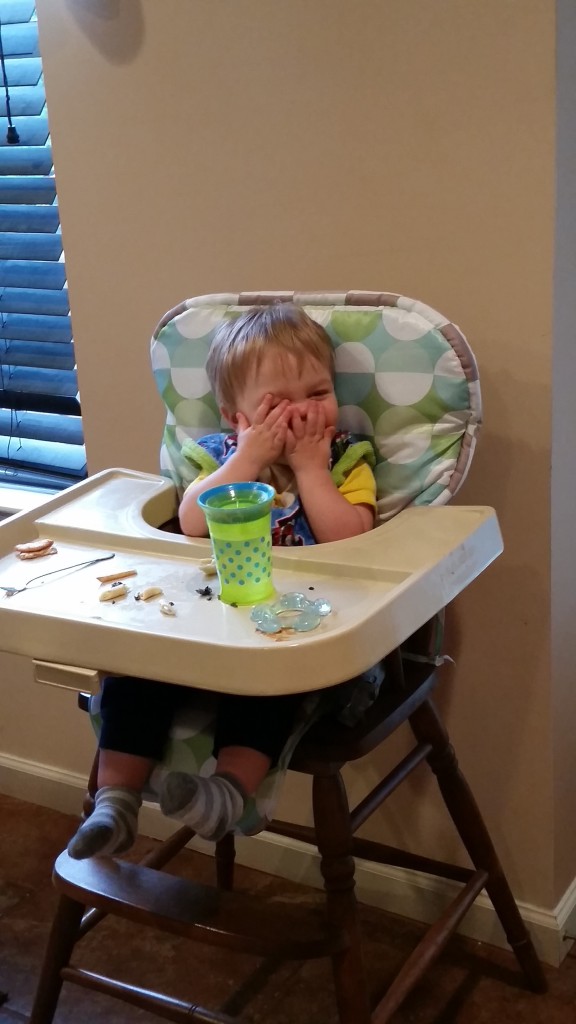 He’s saying small words too, lots of hand gestures. One in particular happens to be “oh my” and then he covers his face… home alone style. He may or may not be also attempting to say Missy… although it sounds a lot like “ISSY”, funny, thats exactly how Little Brother used to say it too.

In a previous post, I told you all I left some fun surprises around Big Seester’s house for her to find. It’s been fun getting the texts as she was finding them one by one… like a scavenger hunt “one of these things is not like the other” in her own house. Well I am happy to report she finally found the last remaining surprise.

When I say these were all over, they were ALL OVER. Nothing was safe in her house… toilet seats, salad jars, coffee mugs, lamp shades, car sun visors. You name it, creepy Nic Cage was there. Beware brother… Googly eyes may appear where you least expect them.

Monday was an office day from home. I did get to have lunch with Mom, Dad, and brother before I left though. Not Your Average Joe’s is always a favorite of ours. My flight was leaving at 5:25pm, until Daddio texted me to just check on it in case… It was delayed till 6:10 due to a late inbound aircraft. So we left a little bit later than planned, but I have TSA precheck so not to worry. I got through and got to my gate, found a seat and waited patiently. The inbound aircraft arrived around 5:50pm, and we were told to sit tight until they could unload, clean, and safety check the plane.

Apparently when the gate people say “we’ll begin boarding in a few minutes if you’ll all just keep your seats, we’ll call when we’re ready” sounds like EVERYBODY UP AND RUSH THE GATE. So people started lining up at the gate before the plane even started unloading, and wouldn’t you know it… there was a mechanical issue. Go on impatient, sit your ass back down.

They told passengers they could meander around the concourse since there would be an announcement at 7:30, not boarding, just an update announcement. But wouldn’t you know it, 7pm rolls around “thank you for your patience passengers of flight 3734 to New Orleans, we’re going to begin the boarding process at this time”. I was on the plane by 7:05. I typically have to gate check my bag, but luckily after waiting I was able to fit it into an overhead compartment. We ended up sitting on the plane waiting for more updates as a thunderstorm rolled in.

bahaha, yeah, we’re not going anywhere while there’s lightning in a 5 mile radius (thanks for that tidbit of info Daddio). So we wait. Storm comes and goes, another one follows, we’re waiting for the flight plans to be approved and the runway to open back up… the woman next to me, a native of Lafayette is just a JOY to be next to…. apparently she’s coming back from Europe, she’s been in and out of airports on and off planes all day. Mind you, I have headphones in… the universal sign for “please don’t talk to me”.

We finally pushed away from the gate at 9pm EST and landed Central Time 10:30pm after rerouting around the weather, so I made it home at 11pm CST. People get so bent out of shape at airports. That piece of paper in your hand with a seat number printed? ONLY YOU have that number. Weather causing a delay? What are you going to do, jet pack up to the plane and tell it to fly faster? Mechanical issue? I sure as hell don’t want to get on a broken plane. At least one other woman got it…. her husband had his panties in a twist and her response was “There is nothing you can do about it, its rain… and a mechanical issue. I’m not getting on a broken plane, so get over yourself”. PRAISE.

Overall a fantastic trip, and a much needed family recharge. I have lots planned for work this month but I’m looking forward to seeing my family and my Aunt/Uncle in Orlando the end of the month!!