This is not a cry for help… this is just PMS.

I had a moment today. I’m not entirely sure what brought it on, quite possibly the imbalance of estrogen hormones chemically reacting in my brain creating ridiculous mood swings… regardless, I lost it.

It very well could have been the emotional and work related stress thats been building up since April… Making sure I’m hitting my numbers within the given time frame, or trying to keep every single person around me happy (including myself). I feel like I’m walking on egg shells. And while yes, I may be an emotional wreck, that is not the most helpful response.

My boss has nicknamed me “nerves of steel” because I never show any emotion, I just do the job at hand. Any emotion or stress gets bottled up until I am in the confines of my own home, alone, usually in the shower, when the tears finally start to stream (my thought process here is if my face is wet, nobody can tell I’ve been crying…. even though theres nobody else around….). I’m terrible at sharing emotions. Stop laughing mom.

“Reduced levels of estrogen during the luteal phase of the cycle could possibly cause a drop in serotonin, although more research needs to be done to confirm this link,” Lower serotonin levels are associated with depression, irritability, and carbohydrate cravings“. So thats why I was so unhappy when I got potato chips in my Panera catering instead of the french baguette I ordered…

I started my day on the wrong side of the bed… I’d gone to bed frustrated at things beyond my control, and in response to a reaction I was hoping would play out differently. But then chatted with my Canadian who was having a worse day, so I figured “buck the fuck up” and go do your job. So out I went, visiting 3 agencies by 9:45am and not getting a single one of them to tack up the new posters in their windows. My goal is 5 displays this week, not exactly a strong start. I had some time to mull things over at a CC’s Coffee shop before picking up my catering order for a lunch training session I was conducting at my 4th agency.

That thankfully went extremely well. Although they aren’t allowed to put anything up in their windows (per Corporate) they were more than happy to tape the new posters to their doors for clients to see when they walk in.

I returned home to get some office work done – sat down at my computer and all of a sudden I couldn’t see because these blasted hormones created salt water reserves in my eyeballs for no freaking reason. Seriously… I sat here crying, I still have no idea why. The tears soon turned into anger because I was crying like an infant for reasons I couldn’t explain when the voice of Elle Woods came to me.

It was time for a run. In 95 degree heat, 57% humidity, feeling like 108 degrees. I just need to destroy my hearing with Def Leppard, Fall Out Boy, Jason Derulo, and Beyonce. “Where the hell are my headphones… how can I be expected to blast my eardrums out with the highest decibel imaginable if I can’t find my f***ing… oh, here they are”. ID? Check. Cash for water just before I pass out due to dehydration? check. Out the door we go.

Mother. Fucker. Its raining… OF COURSE IT’S RAINING. ugh. “Just go, try not to get run over by this Edible Arrangements van.” This tends to be my escape from stress, emotions, and anything else that makes me uncomfortable in life. I go work out. It’s a little slice of the day where I can just be with myself and allow my thoughts and stresses to fall away. I’ll come back to them later, but at this point, I just need to walk away.

People are not going to react the way you expect them to, or hope they do. Some people just don’t know what to do. They run, not pysically, but emotionally. They don’t know how to deal with something, when all you really are looking for is some encouragement or support, they pull themselves out of the equation. Radio Silence.

Off I went, in the rain. Not really knowing where I was heading. Just moving like a turtle wading through peanut butter.

Well I’m sweating, I’ve already cried, and while its not technically salt water, the river was the closest I could get. And I’m still angrier than the king of hell.

You can probably ask my family for backup on this next descriptor, but it was the same angry walk I used to have when call after call didn’t go my way on the pitchers mound….. I can hear the “ohhhhh” responses from here.

Deciding this was the halfway point mainly because I did still have to go back home, I turned around and headed back. All the while playing out scenarios in my head as I was passing through shady streets and characters. “OK, if this guy comes after me I can slug him with a right hook, maybe get a good groin kick in and take off running to that gas station”. My brain is weird.

I guess the exercise did me some good, I managed to smile at another runner passing me. It helped that he was cute, but I supressed the urge to high five him as he passed, just the cordial smile and nod. It stopped raining and Michael Jackson started blasing in my ears, maybe my hormones are rebalancing.

To the men who just think we’re being bitchy, over sensitive and emotional I’ll just point you to the science. To the women experiencing the same thing. I feel your pain, go for a walk. 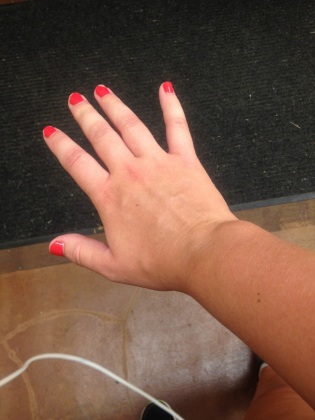 7. All About You – Hilary Duff